The West Indian Manatee is the largest out there in the world. On average they will weigh about 1,300 pounds and be approximately 11 feet long. They range in color from light to dark shades of gray. They live in warm bodies of rivers, bays, and canals. You will also find them all along the coastal areas. They can live in both saltwater and freshwater so they aren’t limited by that factor as other types of manatees are.

They are mainly found in the United States but they also extend down to Central America and South America. In the winter months many of them migrate to Florida. This is where they can find water that is warm enough for them to survive in all year long. After the long winter they will make their way back to their natural habitat. Other places in the United States where they can be found include Alabama, Georgia, and South Carolina.

Like all other manatees the West Indian species are herbivores. They consume about 9% of their body weight each day. They move along in the water very slowly. They don’t seem to be too concerned about various types of predators in the water. For the most part they are safe from them but occasionally they do become prey. They do have plenty to worry about when it comes to humans though.

The biggest problem is the number of boats found along the areas where they live. These are responsible for hundreds of them being injured or killed every single year. Others die from getting trapped in cold water areas or tangled in various fishing nets and lines. The females only have one calf every 2 to 5 years so the rate of creating new manatees is very slow. 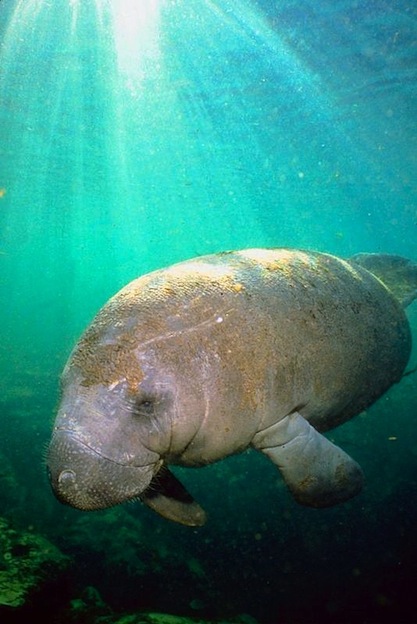 Due to the accessibility of the West Indian Manatee, they are the species we know the most about. Still, there remains plenty of questions about how they communicate because the noises have to come from some part of their body. The fact that they are very calm means people can go swimming with them in the water too. This is a common activity that many people take part in. This has lead to the West Indian Manatee getting plenty of positive publicity.

They also seem to be performing for the crowds at time. Of all the species of manatees the West Indian species is the most agile. They don’t have to be trained to do tricks either because they already know quite a few of them. They have been seem doing somersaults, rolling around, swimming upside down, and even playing follow the leader. People love to watch them engage in such amusing behaviors.

Like other species of manatees, they are loners except when they are mating or when a female is caring for her young. The gestation period is usually about 12 months but for this species it can sometimes be as long as 14 months. It isn’t understood why it is longer in some instances than others.

While the exact numbers aren’t known it is believed that about 3,300 of them remain in the world. That is why they are being protected and efforts are made to make humans more aware of the danger that they create for the manatees. Stricter laws are in place to protect them from harm. The good news is that the state of Florida takes harming a manatee intentionally very seriously. Since many manatees go there for the winter while many others reside there all year long, they strive to protect their natural habitat.