While we know the basics of manatee reproduction, researchers admit there is still a great deal to learn about. The females are ready to mate at about 5 years of age. It is almost twice that long for the males who mature when they are approximately 9 years of age. When it is time to mate you will see a group of five or six males with only one or two females in it.

One fact that many people don’t realize is that the manatee can reproduce any time of the year. The additional hormones in the females will be increased though and then the males will respond to it. Researchers aren’t quite sure what triggers these hormones in the females but it is important to understand that not all females end up having their calves at the same time of the year.

The females will mate with several of the males in the group. This means that the males compete with each other to become the first to mate with her, as is the case with so many other types of aquatic mammals. This process ensures the highest possible chance that the female will successfully conceive a calf before the mating process has been finished for the season. 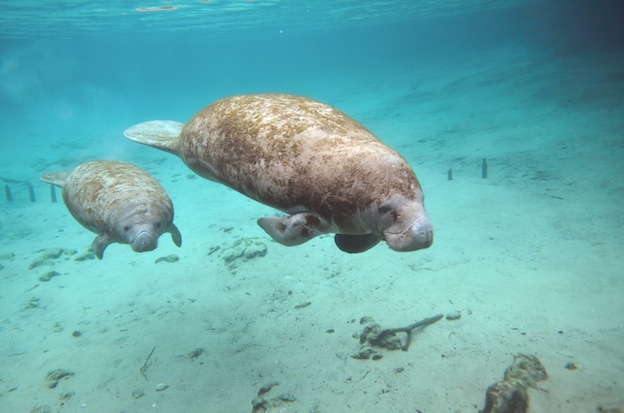 Females only mate every other year due to the long gestation period. However, it can be up to five years between times when she will have a calf due to the conditions of her environment. When a manatee is stressed or food is scarce she will not want to take part in the mating process.

It will take a full 12 months after conception for the calf to be born. Usually there is only one at a time but some reports of twins has been noted. The mother’s take very good care of their young and they nurse them until they are between a year and two years old. However, they are also introduced to various types of plant life when they are a few weeks of age as well.

When a manatee calf is born, it weighs approximately 70 pounds and is about 6 feet long. The calf is first nourished from the milk that the mother produces. The nipples are located behind the flippers. The calves know how to swim immediately and they have been seen suckling as their mother moves slowly through the water to find her own food. 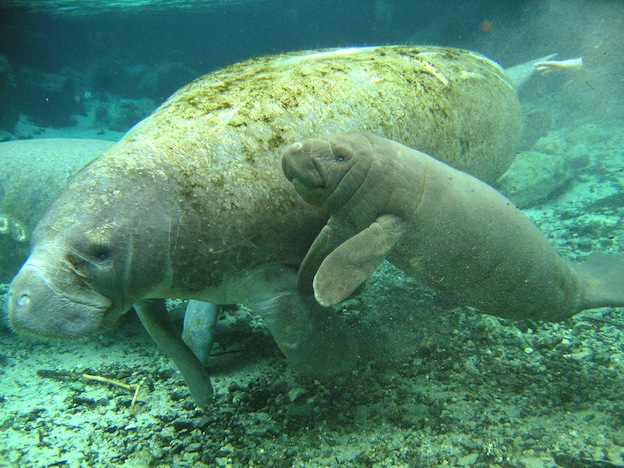 There are plenty of dangers out there lurking for these young manatees. While their mothers do take great care of them, nature isn’t always on its side. There are predators in the water such as crocodiles and alligators that find this smaller manatee’s to be a great meal. Should the mother be injured or killed she won’t be able to care for her young either.

Young manatees are very curious and they can end up eating something that isn’t good for them such as plastic or fishing line. They can even get caught up in fishing nets or hit by boats. For the most part their mother’s take very good care of them. However, there are times when a mother will abandon her calf and it isn’t fully understood why this occurs.

A very interesting note is that the manatee is often confused with the dugong in the water. While they generally keep their distance there has been credible evidence to suggest that they do sometimes mate. The result of these encounters though are that the calves are born dead or die before they reach sexual maturity. There are only isolated instances of this taking place though so it isn’t a huge concern for researchers to involve themselves in.