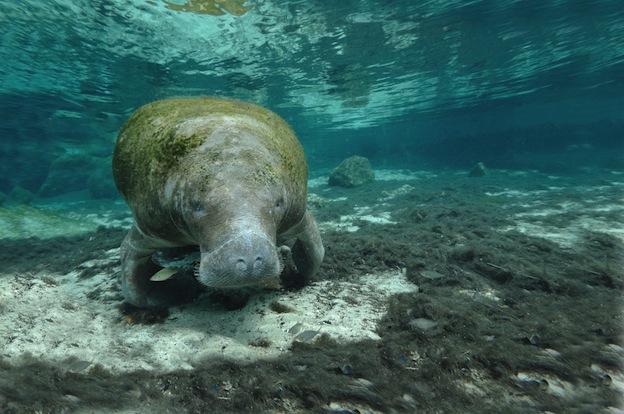 Due to the way their bodies are designed, the manatee doesn’t do well in cold waters. Therefore you will find them where the water is going to be at a warm temperature all the time. In fact, they won’t be able to survive if the waters are less than 60 degrees Fahrenheit. The main areas for them include Florida, Africa and the Amazon. You will find that many manatees migrate in the winter to the very warm waters along the coast of Florida.

There are three areas in the world where Manatee live, the Caribbean, West Africa and the Amazon River.

Researchers have long noticed that the manatee live near power plants as well. This is due to the fact that they make the water warmer by many degrees. This information was very important as when such power plants close those manatees’s can die due to the rapid change in the water. Now when a power plant will be closing the manatees are moved. Still, research is being done to identify alternative ways of warming the water when such needs are there.

While the manatee are loners, they have no problems living where other manatee happen to be. They do greet in passing or communicate with chirps but there is no aggression in regards to territory. There are many other types of animals that live all around the manatee because there is no danger since these animals don’t consume meat. They include turtles, small sharks, flounder, and oysters in the marine waters.

Those manatees that are found in the freshwater also have a variety of other creatures around them. They include an assortment of including bass, otters, turtles, frogs, snails, and mollusks. What you will observe around them comes down to the time of year, the amount of food readily available, and the location.

Due to their need for warm waters, huge masses of manatee migrate to Florida annually. They are usually there from November to March. The temperature of the water is generally at least 70 degrees there. As the summer emerges they are found along many other state coastlines in the USA as well. They include Georgia, Alabama, and South Carolina.

It is believed that at least 3,000 manatee have a permanent residence in Florida. With the various tracking devices that have been placed on some of them, we have found out key information.

It is believed that the Amazonian Manatees are only found in freshwater. They are found along the Amazon Basin all the way to Brazil as well. The number of them in other areas has dropped drastically low. Still, they can be spotted occasionally in the areas of Peru, Ecuador, and Colombia. Where they will be depends on the temperatures of the water.

One manatee called Chessie by the rescuers in Chesapeake Bay moved it from the cold waters there to Florida. They also placed a tracking device on Chessie before he was released. The following summer he had traveled all the way from Florida to Rhode Island!

Any habitat where the manatee lives has to provide it with some basics. First, they need to have water that is warm enough and that is shallow. They also need to have easily access to plenty of plant life for them to feed off of.