The African Manatee is the one species that we know the least about. In fact, even getting photos of them is hard. You won’t find too many of them compiled even from those researchers that are quite fascinated with the African Manatee. They are known to live only in freshwater areas. They have been seen around the coast of Africa, Nigeria, and down to the Republic of Congo.

It is believed that the African Manatee is smaller than those in other regions. On average they are believed to be from 800 to 1,200 pounds. They are also believed to be about 14 feet in length but many are only about 10 feet long. Generally speaking, for manatees that living in estuaries, the main source of food for them are the mangrove trees. It actually grows on the land and then extends into the waters. They also search for a variety of different plants found in their natural habitat.

The African Manatee is thought to live a very peaceful existence among the waters there. They do fall victim to sharks and crocodiles from time to time though. The biggest concerns for them come from humans. Due to the way in which human actions have polluted the water and the air they are suffering. Add in the fact that we continue to take away their natural habitat and they have fewer areas to find food and to stay in water that is warm enough for them to survive.

Poaching seems to be a big problem with the African Manatee as well. Even though they are protected due to the vulnerable status, there aren’t strict laws to enforce such protection. Many people still hunt them for food in order to survive in the poor regions of Africa. While you can’t blame them for looking for a way to survive themselves, each one they destroy brings the total number of African Manatees to a lower count.

Many of the African Manatees that have ventured up the Niger River end up starving to death. There are times of the year that this part of the river will completely dry up due to the hot temperatures and the lack of rain. Many go there during the rainy season and they the water is gone and they aren’t able to get to other bodies of it before it is too late. 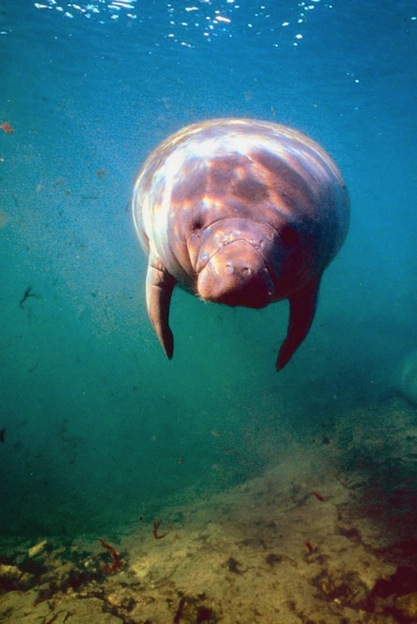 Mating can be difficult for the African Manatee as they seem to spread out more than the other species. Even so, the males come together in small groups to court the females. It takes about 13 months for the calf to be born. They mother generally forms a strong bond immediately with the calf.

In many areas of Africa though this manatee is highly regarded. There are many legends and stories that talk about them being a protector of man. There are also stories about them being very closely related to the magical mermaids of the waters. These cultures believe that harming the manatee will bring back things to their people.

There is no denying that there is plenty left to learn about their habits and their behaviors. It is also important for us to learn ways to help stop the decline of their population. If such efforts aren’t in place then we may one day find that the African Manatee is only a part of history instead of still on Earth.